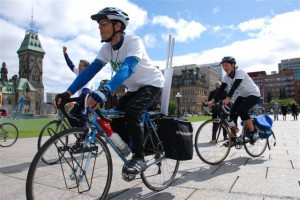 On September 15, Pedal for the Planet riders hit Parliament Hill after riding across Atlantic Canada, Québec, Ontario, the Prairies and British Columbia.

The riders relayed a message from Canadians across the country: we need to stop Canada’s backpeddling on climate change. Canada must do its fair share.

We heard some inspiring words from the riders — Malkolm Boothroyd, who cycled all the way from Whitehorse, and Martina Nowak, who cycled from Victoria. Nathalie Houle and Eugénie Capel spoke on behalf of the many cyclists who crossed Québec.

After the rally, cyclists joined a virtual world tour around Ottawa, a low-carbon journey to search for Canada’s missing climate action plan. We were welcomed by Wim Geerts, Ambassador of the Netherlands to Canada. He talked about how the Netherlands encourages cycling as a sustainable form of transportation.

We rode to Bangladesh and Tuvalu, countries hit by rises in sea level, and Costa Rica, which plans to go carbon neutral by 2021. We visited the European Union, which is taking action to switch to renewable energy.

We finished our ride outside the Embassy of Denmark. Deputy Head of Mission Jakob Henningsen talked about how cycling is encouraged in Denmark. In Copenhagen, almost half of trips to work or school are by bicycle.

What is Canada doing? We hope these examples will inspire Members of Parliament to create a climate plan for Canada. They can start by supporting the swift passage of Bill C-311, the Copenhagen Climate Bill.

The next night, Pedal for the Planet riders and Members of Parliament returned to the Hill for a special screening of “The Age of Stupid.” The film presents a clear warning: future generations are threatened by increasing temperatures, extreme weather events and rising sea levels. The September 16th screening was presented by Sierra Club Canada and Linda Duncan, MP for Edmonton-Strathcona.

We would like to congratulate all the riders and volunteers across Canada who joined Pedal for the Planet. People cycled thousands of kilometres, braving bears, blackflies and torrential rains on windswept roads.

A small group of dedicated volunteers and staff members spent countless hours in meetings, while most people were away on summer vacation. Without all our hard work, Pedal for the Planet would not have been possible. We would like to thank everyone for joining us. 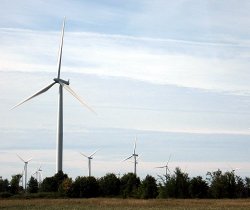 Our first stop was Queen’s University. We focused on the tar sands with a teach-in by Clayton Thomas-Muller from the Indigenous Environmental Network. He talked about the devastating impacts tar sands extraction is having on First Nations communities. With contamination of the Athabasca River, he said, high rates of cancer are hitting Fort Chipewyan and other communities.

He stressed that exploiting the tar sands leads to violations of fundamental human rights. Producing dirty tar sands oil contaminates water supplies and dumps millions of tonnes of greenhouse gases into the atmosphere.

After the tar sands talk, we headed over to the waterfront to catch a ferry to Wolfe Island. We cycled along the coast, the sky illuminated by the stars and the planet Jupiter. The moon was rising, casting a warm glow on the water of the St. Lawrence River.

The following day, we pedalled down some country roads to have a look at the wind turbines on the island. There are 86 wind turbines, in one of Ontario’s largest wind farms.

The blades whirl slowly, high above farmers’ fields. They generate power for people on the mainland, and generate millions of dollars in economic benefits for farmers and the township. Now the islanders are debating what to do with the extra income.

With finite supplies of oil and uranium, we are faced with a clear choice. We can continue sinking billions of dollars into the fossil economy, or move to green sources of energy such as wind and solar power.

After visiting Wolfe Island, I felt more optimistic about our future. The people of Wolfe Island have shown us that it is possible to transform our economy, making the transition to renewable energy.